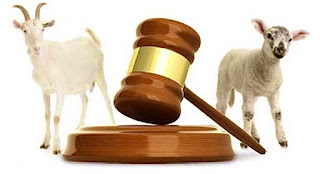 Did you know that Jesus cleaned the temple twice? For some reason, in my mind, I combined the occurrences. So, when I read the heading that said, “this is the second cleansing of the temple,” it sparked my curiosity. The first time he drove everyone out with whips, it’s only written about in John 2. I’m sure the officials weren’t happy about it the first time, but when he did it again, he started cutting into their profits, so they began to look for a way to get rid of him. The problem was that the people loved him and he spoke with such authority, that they were afraid of him and of what the people would do.

I’ve mentioned this before, but I believe we are seeing a cleansing taking place, similar to separating the sheep from the goats. If this political season has done nothing else, it has exposed the goats and money changers. The money changers are those who are only there to profit from the people of faith and the goats are those who identify as a Christian but do not have salvation. May God give us the wisdom to figure out a way to help them take the blinders off without being so angry with them. I would hate for them to be cursed like the fig tree and wither away; they already know about Jesus, but haven’t committed their lives to him; if they don’t change and bare fruit, the way of the fig tree will be their demise. We need to pray fervently for these people. After all, they will be the hardest to convince because they believe they are already saved. Pray for the Holy Spirit to penetrate their hearts.

And he will place the sheep on his right, but the goats on the left... “Then he will say to those on his left, ‘Depart from me, you cursed, into the eternal fire prepared for the devil and his angels. Matthew 25:33 and 41

And they came to Jerusalem. And he entered the temple and began to drive out those who sold and those who bought in the temple, and he overturned the tables of the money-changers and the seats of those who sold pigeons. Mark 11:15

Posted by Teresa Gonzalez at 4:13 AM