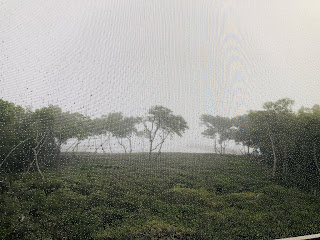 In the Old Testament, when God had released Israel from their captivity in Egypt, He guided them through the desert by a pillar of cloud by day and a flame of fire by night. They didn’t know where they were going, except that they were looking for the promised land. I’m reminded of it because where I’m sitting while writing this, the fog is as thick as pea soup! When I stepped outside, I couldn’t see very far, but could feel the moisture in the air. The Israelites wandered in the desert for forty years, and the cloud and flame never left them. What an incredible sight that must have been! It’s amazing, with this fog, the wind has stilled and the water has calmed. It’s so hard to remember that God is with us when we are struggling. Let this be a reminder that while you’re in the wilderness and your head is in a fog, rely on the Lord for guidance.

The pillar of cloud by day and the pillar of fire by night did not depart from before the people. Exodus 13:22
Posted by Teresa Gonzalez at 5:59 AM No comments: 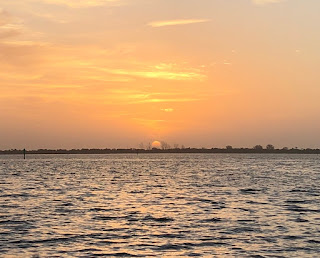 Starting out on the dock, I watched the sunrise. It was quite beautiful, but then I felt God leading me to the mangrove. The mangrove is the trash collector of the sea, so if you observe, you will find all kinds of litter and debris. I found two foam buoys that came off someone’s crab traps. One buoy was loose and one was still attached to the rope, and the rope was buried. The purpose of the buoy is to mark the location of the crab trap so the fisherman can find it and collect their harvest. When bad weather hits, it can become detached from the trap. Those markers that are firmly attached will stay put and continue to mark the harvest. The lesson in this is to stay firmly attached to Jesus, because He is Lord of the harvest. You never want to be like the buoys that wash ashore. You especially don’t want to have your rope buried in the sand! Stay rooted in God’s word and He will lead you to a bountiful harvest.

Therefore, as you received Christ Jesus the Lord, so walk in him, rooted and built up in him and established in the faith, just as you were taught, abounding in thanksgiving. Colossians 2:6-7
Posted by Teresa Gonzalez at 6:00 AM No comments: 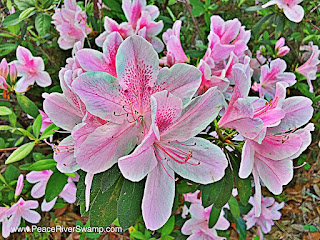 Remember to have compassion. That person at the check out who was nasty to you, doesn’t know your peace. That driver who won’t let you over is heading to hell; pray for them. The young mom with the out-of-control children has no one to turn to for help; you help her! You were once lost, defeated, and didn’t know where to turn, and the Lord lifted you out of that pit of despair. He brought you near and comforted you. He gave you a reason to live. Your gaping wounds are healed, and your blood stained hands are clean. You were made whole. Most are still walking in darkness with no hope, they need to see Jesus through you. You have a testimony, share it. You will be put into situations orchestrated by God to show His love, don’t let Him down. Sow seeds of love and compassion for Jesus, and the harvest of delicious fruit will come in its season.

One gives freely, yet grows all the richer; another withholds what he should give, and only suffers want. Whoever brings blessing will be enriched, and one who waters will himself be watered. Proverbs 11:24-25
Posted by Teresa Gonzalez at 5:32 AM No comments: 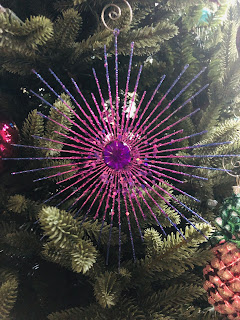 As I was reading the story of the birth of Jesus this morning in Matthew, I noticed a couple of interesting things. After the wise men left, an angel appeared to Joseph in a dream telling him to depart for Egypt because Herod was going to try and destroy the child. The first thing I noticed is that Joseph had inclined his ear to hear the word of the Lord through his dreams. The second thing is that even though it was Jesus, He didn’t stave off the assailants who were sent to destroy Him, He made Joseph responsible for His protection. In other words, you can’t stand in front of a moving train and expect for God to save you, you have to get off the tracks! Figure out how you hear the Lord the best, whether it’s by reading the Bible, that still small voice of the Holy Spirit, or whatever it is, and listen carefully to Him. Then take the action needed to help your situation.

Now when they had departed, behold, an angel of the Lord appeared to Joseph in a dream and said, “Rise, take the child and his mother, and flee to Egypt, and remain there until I tell you, for Herod is about to search for the child, to destroy him.” And he rose and took the child and his mother by night and departed to Egypt Matthew 2:13-14
Posted by Teresa Gonzalez at 5:38 AM No comments: 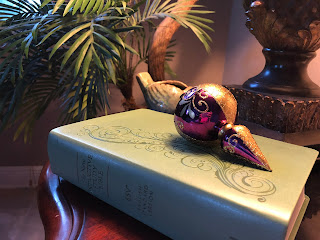 Trying to find the perfect gift for children who have everything, can be a challenge. I had the brilliant idea to get the older kids a metal detector, not realizing that it would require more than batteries! The good thing is that they had their dads there to get it up and running. I also had the idea to hide coins in the yard for them to search for, that was a bad idea too! The coins fell into the thick grass, causing them to start digging up my sod! I think they only recovered about fifty cents out of six dollars in coins. On this Christmas Eve, remember the treasure we have in Jesus. He spoke about the man who found a hidden treasure in a field, covered it up and sold all he had to buy the field. There are riches, and hidden treasure to be found in God’s word, and it’s on almost every shelf, in almost every household; you won’t need a metal detector to find it, it’s hidden in plain sight.

“The kingdom of heaven is like treasure hidden in a field, which a man found and covered up. Then in his joy he goes and sells all that he has and buys that field."  Matthew 13:44
Posted by Teresa Gonzalez at 5:25 AM No comments: 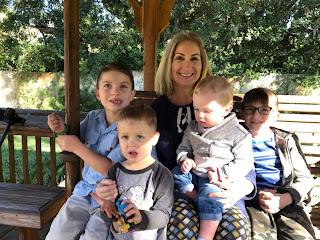 My heart is full. The holidays can be draining with all the required preparations, but the reward is well worth the trouble. With our family going in all different directions, we chose to have our celebration a couple of days early to catch as many family members as we could. With the prior two days filled with rain, it was as if God had cleared the skies just for us. I chose to not get overwhelmed, and enjoy my time with the precious souls that God gave me to nurture. In the next few days, try to slow down and balance yourself between Mary and Martha. Be Martha before your guests arrive, and become Mary once they are there. Follow Jesus’s example, and make this more about loving your family and guest, and less about the show.

But Martha was distracted with much serving. And she went up to him and said, “Lord, do you not care that my sister has left me to serve alone? Tell her then to help me.” But the Lord answered her, “Martha, Martha, you are anxious and troubled about many things, but one thing is necessary. Mary has chosen the good portion, which will not be taken away from her.” Luke 10:40-42
Posted by Teresa Gonzalez at 5:49 AM No comments: