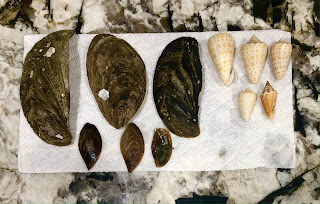 Walking on the beach yesterday gave me some clarity and a little foresight into the coming days. You might think this is silly, but I hear God’s voice in odd ways; he knows that I will use what he gives me to glorify him, so he speaks to me in ways I understand.

The first thing I found on the beach was a cone shell; they are not rare when you consider the vast ocean, but I don’t find them often, and I found several. I’m sure there were so many shells on the beach because of the hurricane that just passed our shores and stirred up the bottom, then revealed them with the low tide. With every hurricane, there are predictions, and if you live in a state that is subject to them, you will understand the cone of uncertainty. We are now living within that cone, and the hurricane is Jesus. He is certain, and the fate of those who don’t know him is inevitable and will be devastating.

There was another thing I found that is quite unusual, and it’s called an operculum. It is the door of a sea snail, probably from a whelk or a conch; it seals off the shell and protects them from predators. I found more of those than I’ve ever found at one time. The message is that the door of opportunity is closing, and the enemy will be left outside clamoring to get in.

I know that if you are following my post, you are likely saved, but there are too many who aren’t, and their time to accept God’s free gift is slowly dwindling, and they will be left behind and tormented by the enemy during the tribulation. It’s time to gather everyone you know who doesn’t have a relationship with Jesus and do your best to convince them that he is their only way into the kingdom of Heaven. If you love them and don’t want them to suffer, tell them about Jesus. We are in the cone of uncertainty, and the operculum is closing to protect everyone on the inside; predators will eat those on the outside; those on the outside are the unsaved.

“For God so loved the world, that he gave his only Son, that whoever believes in him should not perish but have eternal life. For God did not send his Son into the world to condemn the world, but in order that the world might be saved through him. John 3:16-17

Posted by Teresa Gonzalez at 4:05 AM