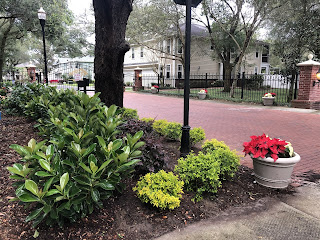 A couple of my neighbors and I got together to landscape an area of our community that had suffered from neglect for years. The shrubs that were there had grown into trees, so last year, we had them cut down. Upon cutting them down, it unveiled this hideous bright blue pipe, so for an entire year, we have had to look at that pipe every time we drove in or out of the neighborhood.

Let’s just say the three of us learned a valuable lesson in roots. Not only did we have to deal with the roots of the previous shrubs, but there was also an enormous oak tree with its web of roots with which we had to contend. The clusters were tight, and after removing one, more were revealed. Some of the roots were thick and ran deep, but others were smaller and branched off the main root. If we had been dealing with just one tree, it might not have been so difficult to dig in, but because there were so many, it took extra time to remove the old to replace it with the new landscape plants.

These roots are a picture of the minds of people who are tormented by their past. As humans, we tend to let a bitter root grow and multiply over the years rather than deal with the intrusion right away. That bitter root will draw more bitterness and become a tangled mess within our minds. Trying to get rid of them after years of neglect could be like me and my neighbors trying to dig holes among a cluster of the tree roots; it’s nearly impossible. You can try and remove them one at a time, but if that cluster is like the root system we dealt with during our landscape project, it could be challenging. Still, sometimes that’s the best way to remove them; however, if you will talk to Jesus and ask for his touch, you could have a whole legion of demons cast out all at once.

Before we finished, our landscape maintenance crew came to plant our poinsettias for the holidays. They are experts at digging and had more powerful muscles than us, and they helped us complete the project within minutes. They offered to help us as Jesus would have, but there are times you need to ask.

Don’t live with the oppression; ask now for some help; dig out the root of each issue one by one, or have the entire web of roots remove by the Lord. He has compassion for us and wants us to live free. Begin today to seek freedom and plant something new in your newly cultivated mind.

For freedom Christ has set us free; stand firm therefore, and do not submit again to a yoke of slavery. Galatians 5:1

Posted by Teresa Gonzalez at 5:42 AM