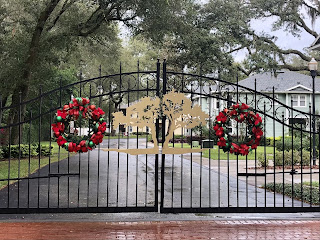 Each Christmas, our community hangs a couple of wreaths on our front entry gate. After using them a few years, the ornaments had become weathered, so I volunteered to redecorate them to give them a fresh new look. I had thought this would be an easy task, and for the most part, it was; however, I didn’t take into account their rough condition and spent nearly an hour removing the old stuff and fluffing out the branches. After that, I began preparing the ribbon and making the bows. I somehow underestimated the size bow I needed and had to remake them because they weren’t the right proportion. I don’t like starting over, but sometimes you must do it again to ensure you get it right.

Jesus had become popular, and people flocked to him to hear him speak and see his miracles. Simon had just finished working and was cleaning the nets getting ready to go home to rest. The crowd was pressing in, and Jesus saw the boats of Simon, and James and John near the shore, so he got in Simon’s boat and asked him if he would set out so he could preach from the water. After his sermon, he told Simon to put out into the deep and cast his nets again; he didn’t want to because they had fished all day and caught nothing, but he did it anyway. The catch was so overwhelming that both boats nearly sank because there were so many fish. After that, Jesus called them to become fishers of men.

Jesus gave Simon, James, and John another opportunity to become successful in their endeavor. If you feel defeated and are ready to give up, here is your word, start again. With Jesus, anything is possible.

And when he had finished speaking, he said to Simon, “Put out into the deep and let down your nets for a catch.” And Simon answered, “Master, we toiled all night and took nothing! But at your word I will let down the nets.” And when they had done this, they enclosed a large number of fish, and their nets were breaking. Luke 5:4-6

Posted by Teresa Gonzalez at 4:54 AM