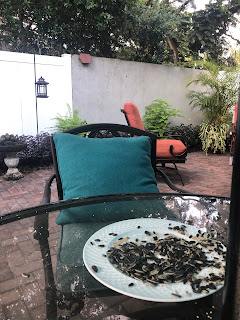 A few days ago, I decided to pour some bird feed into a plate and place it on my patio table. My dogs go crazy over the squirrels, so I thought it would be fun to attract them into my yard and give them a reason to bark. The fun thing is that the cardinals love to eat off the table too; I’ve seen a few enjoying the free buffet rather than the feeder. The problem is that it’s messy! I don’t mind the mess. I’ve also noticed that the squirrels have come to the table because they've opened the sunflower seeds, though I haven’t seen them eating.

Ministry works this same way. Ministry can be messy, but if we don’t put the food out in different areas, it won’t be diverse enough to attract the masses. I just keep putting food on the table of social media, and in other areas of my life, like many of you do. I don’t always see the squirrels eating the food, but I know that they’ve been to the table when I notice their posts and their lives changing; I didn’t even know they were eating!

Jesus did the miracle of feeding the thousands twice. One time was during Passover, and the next time was just an ordinary day. He gave them bread. He called himself the bread of life and told us his body was the bread and that we should eat from him. He put the food out for all of us; we need to eat it!

And they ate and were satisfied. And they took up the broken pieces left over, seven baskets full. Mark 8:8

Posted by Teresa Gonzalez at 6:10 AM