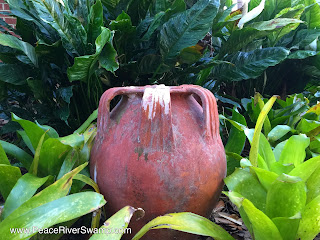 If you haven't noticed in the headlines and on social media, Satan is a destroyer of children and families. Anyone who tries to stand in his way is at risk of being torn apart. My sister-in-law, who is a social worker that unites families, was in a near tragic car accident. She had been meeting with a woman who had mental issues just before she left her office. She said that the car that hit her almost rolled right on top of her. As she recalled, it looked as if a powerful force lifted it over her car preventing it from crushing her. The woman showed up at the accident scene! However, God had two of His workers there too; a paramedic to help her and a friend to comfort her. She's still alive, Satan lost yet again! If this is not a picture of a spiritual war between good and evil, I don't know what is. God is so much stronger and more powerful than Satan, and if you have been sent by Him, He will protect your life for His service.

But we have this treasure in jars of clay, to show that the surpassing power belongs to God and not to us. We are afflicted in every way, but not crushed; perplexed, but not driven to despair; persecuted, but not forsaken; struck down, but not destroyed; always carrying in the body the death of Jesus, so that the life of Jesus may also be manifested in our bodies. 2 Corinthians 4:7-10
Posted by Teresa Gonzalez at 4:43 AM