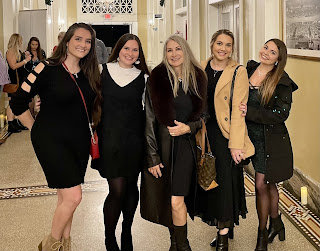 For years, my daughters and I had traditionally gone to see the Nutcracker ballet at the posh Performing Arts Theater in Tampa. We got away from doing that because, as usual, they grew up and had their own families. Still, we tried to accommodate that tradition when we could. I didn't even propose the idea this year, but one of them found tickets to a concert by a string quartet who performed the Nutcracker music plus other notable classical pieces, and she insisted that we keep up with our tradition. It was in the Ybor City area of Tampa, so I wasn't expecting much, similar to going to an off-Broadway show. Well, all I can say is we were overwhelmed to tears by the music's beauty and the soloist's robust voice. It was one of the best concert performances we have ever attended. It was an utterly heavenly experience.

It reminds me of the humble beginnings of our Savior, whom most believed would be born in a palace adorned with robes and attended by many servants. However, he was born in a stable and laid in a manger to show that he was accessible to all, not just to the elite. The girls and I dressed in our holiday best because that's how we are, but others dressed in shabby attire which reminded me that the concert was accessible to all, just like our Savior. Jesus is the picture of beauty wrapped in humble garb, and all are invited to come to him.

For unto you is born this day in the city of David a Savior, who is Christ the Lord. And this will be a sign for you: you will find a baby wrapped in swaddling cloths and lying in a manger.” Luke 2:11-12

Posted by Teresa Gonzalez at 4:37 AM