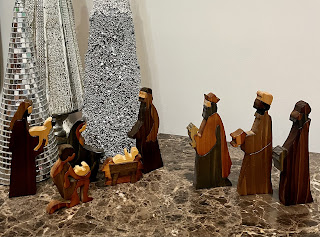 We have foolishly fallen for the notion that there were three wise men, but the Bible doesn’t specify. That number is arbitrary and was assigned by the Roman Catholic Church. We have also been falsely led to believe that they visited him in the stable, as depicted in the nativity displays. Another lie is that they were kings; the Bible doesn’t say that either. These observations further make my point that we need to read our Bibles carefully and not read into it what is not there.

My question today was: How did these gentile wise men know that the star indicated that a king had been born for Judah? After a bit of reading, I discovered that it could be because the star had suddenly appeared over that country, and that’s how the wise men knew that a king for Judah had been born. They first went to Jerusalem and inquired of King Herod, who probably got all in a tizzy thinking he was about to be replaced. He asked them to report back to him when they found the newborn King, but they were warned in a dream not to return to him. They followed the star that led them to Jesus. When I look at the stars while riding in the car, it seems like they are following me, so I assume this star was lower in the sky and moved, giving them a beacon to follow. It had to be moving because the Bible says it came to rest. The point is to be careful what you believe and study your Bible because it is the ultimate truth.

After listening to the king, they went on their way. And behold, the star that they had seen when it rose went before them until it came to rest over the place where the child was. When they saw the star, they rejoiced exceedingly with great joy. Matthew 2:9-10

Posted by Teresa Gonzalez at 4:48 AM