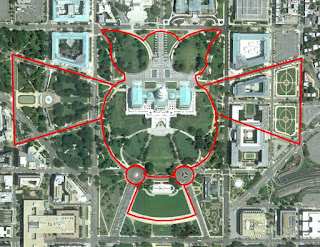 I was doing a word study on “beasts” this morning because, in my daily Bible reading, Paul mentions contending with the beasts at Ephesus. Beasts, in this circumstance, refers to angry men. I tend to think that maybe the beast mentioned in Revelation could be a category of people, the wealthy elite class like the Rockefeller’s, Rothschild’s, and others who control the money and banks around the world; they are the ones pushing for a New World Order to gain control of the world's people and make us a slave to them.

Then the people doing their bidding, like Hollywood, the media, and politicians, could they be the Great Prostitute? They do anything for money and seem to be bowing to something that makes them hostile toward their country.

Whether it is or it isn’t, we all know there is something criminal going on, and if this is true, we can be thankful to be on the side of Jesus. Take a look at the White House in Washington, DC, and notice what it has become. It appears deserted, and things happen under cover of darkness. There is an earth camera pointed at it, and the light goes dark at 11 pm, then, on occasion, you see people in black carrying things out of there. What’s going on? Look at the following verse in Zephaniah. He also mentions beasts.

Herds shall lie down in her midst, all kinds of beasts; even the owl and the hedgehog shall lodge in her capitals; a voice shall hoot in the window; devastation will be on the threshold; for her cedar work will be laid bare. This is the exultant city that lived securely, that said in her heart, “I am, and there is no one else.” What a desolation she has become, a lair for wild beasts! Everyone who passes by her hisses and shakes his fist. Zephaniah 2:14-15

Zephaniah was a prophet and appeared to be talking about Nineveh and Assyria, but if you notice, prophecy can unfold in other ways. The White House seems empty, the fencing is surrounding the owl, and we are all hissing at what is going on.

Were the things happening now prophesied? Are we living out Revelation? Could Zephaniah have been talking about the White House? Only time will tell, but it’s amazing how the pieces of the puzzle seem to fit.

Posted by Teresa Gonzalez at 4:36 AM