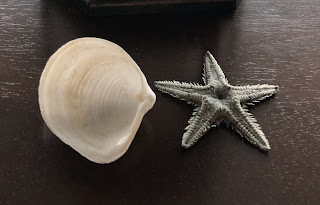 When I was walking on the beach yesterday, God’s voice became clear. I began seeing a seashell called a sailor's ear; they are a delicate clam that is pure white. Their name made me realize that I needed to listen. The next thing I began seeing is sea stars or starfish. I picked up a dead one to keep; I saw where a star had been, someone else had picked it up; then I found a live one that I placed back in the water. There are scriptures that mention both ears and stars; it was a lightbulb moment. Revelation 2 and 3 mentions seven stars representing the seven churches, saying, “He who has ears, let him hear.” Observe what God showed me:

The dead sea star represents a dead church, which I would associate with a cult or one whose parishioners follow a false prophet.

The missing sea star represents those who give the impression that they are saved but are missing the truth; those people are pew fillers.

The living sea star represents those who are being saved. The star that I put back in the water was barely alive, but its little feet were still moving. That star represents us, those who Jesus covered with living water; we are still alive.

There is a list of rewards for conquering and holding on until the end. Though you may face adversity for believing in Jesus, the reward for pushing through to the end will be worth it. Hold on, and let no one take your crown!

To the one who conquers:

I will grant to eat of the tree of life, which is in the paradise of God. Rev 2:7

I will give some of the hidden manna Rev 2:17

I will give him a white stone, with a new name written on the stone. Rev 2:17

I will give authority over the nations, Rev 2:26

will be clothed thus in white garments Rev 3:5

I will never blot his name out of the book of life Rev 3:5

These are partial verses. Read both chapters for context.