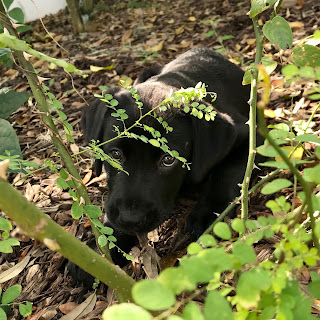 God’s Word is comforting because he cares about you; that’s why you turn to it when you are feeling insecure or hopeless.

My neighbor has a new Labrador puppy. She is sweet and loving, but she’s still a puppy. When my neighbor leaves to go to school, the puppy cries for her, howling and whimpering; it’s the saddest thing I’ve ever heard. My heart breaks, and all I want to do is comfort her, but I can’t because walls and doors block my way.

Jesus sent his disciples into towns before him to preach and prepare the people for his arrival. Their job was probably to help soften the message they were about to hear, open doors, and tear down walls that might block them from being consoled by his message.

He’s coming back and has sent us into the world to prepare the people of today; only now we must give them the entire message because his return will bring distress on those who don’t believe. People need to know Jesus for a soothing message like we receive through the scriptures. You can hear their cries, just listen to the news for a few minutes; it’s heartbreaking.

Don’t worry about the puppy; she’s just spoiled and settles down after a bit of time passes.

Do your best to open doors and break down walls standing between others and Jesus; he has sent us out before his return to help save the lost and bring a comforting message.

After this the Lord appointed seventy-two others and sent them on ahead of him, two by two, into every town and place where he himself was about to go. Luke 10:1

FYI - the King James Version says 70. Half of the transcripts say 70, and half say 72; don’t get too caught up in the number, it’s the message that’s important right now.

Posted by Teresa Gonzalez at 4:12 AM