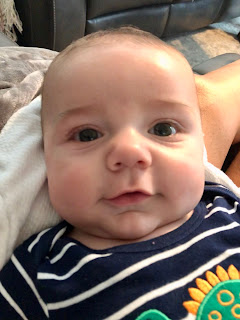 Ethan was a Levite, and served in the house of the Lord. He served beside Herman, the son of Samuel; they worked in the service of song. He was a singer and songwriter and may have helped pen Psalms 88 and 89. I have some of the brightest grandsons, but today, I am going to brag on my newest, Ethan, who is only three months old. What can a child do at three months, he is still a bed baby? Ethan is very vocal, he speaks a language that only God and the angels understand. His vocals are not limited to conversation, he sings along with the television, and gets very excited about his music. The name Ethan is described in today's definition as meaning strong, which also suits him, but I prefer the reference to his name in the Bible, as a singer and songwriter. Will our Ethan be a poet, and pen songs for use in the house of the Lord, just as Ethan in the Bible did? It’s too early to tell, but because he has not been tainted by the world yet, it looks like he is well on his way to becoming everything the Lord has planned. Even after being subjected to the world, his trials will give depth to his songs. Let us hope his name is a prophecy from the Lord. When you find the time, look up the meaning of your name, you may find it mentioned in the Bible like Ethan; see if it resembles your personality.

These are the men whom David put in charge of the service of song in the house of the LORD after the ark rested there. They ministered with song before the tabernacle of the tent of meeting until Solomon built the house of the LORD in Jerusalem, and they performed their service according to their order. 1 Chronicles 6:31-32

On the left hand were their brothers, the sons of Merari: Ethan the son of Kishi, son of Abdi, son of Malluch, 1 Chronicles 6:44

Posted by Teresa Gonzalez at 5:43 AM