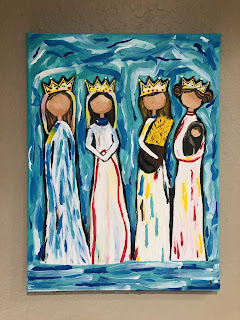 I became weepy realizing the amazing love Jesus has for us. Not only was His love extraordinary because of His willingness to die for us, which by itself was enough, but the fine detail put into every moment leading up to it. I commissioned my daughter to recreate a painting that I’m over the moon about, and she did an excellent job. I love the artist that created it, but she didn’t have prints for sale in the size that I wanted. The painting is called “The Four” and it depicts the four women mentioned in Jesus earthly lineage. You would think that the women in His ancestry would be of impeccable reputations, and from clean Jewish families, but that’s not the case, most were not even Jewish! Tamar posed as a prostitute to get Judah to sleep with her. Rahab was the prostitute that helped the spies scope out Jericho, Ruth had a good reputation, but met Boaz on the threshing room floor, to which he said “Let it not be known that the woman came to the threshing floor.” Then there was Bathsheba, whom King David found attractive after seeing her bathe, slept with her, got her pregnant, and then had her husband killed to cover it up! This is a good reminder that you are not tainted and that Jesus is not ashamed of you. It’s time to stop beating yourself up!

let us draw near with a true heart in full assurance of faith, with our hearts sprinkled clean from an evil conscience and our bodies washed with pure water. Hebrews 10:22
Posted by Teresa Gonzalez at 5:49 AM