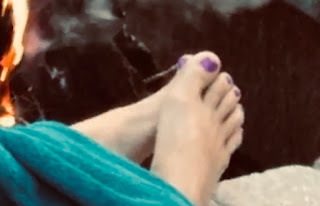 My friend was given the gift of a massage for her anniversary. Massage feels like such a luxury, but there can be more to it than that. As the therapist began massaging her feet, she pointed out areas of concern within her body. She could tell right away the she had a few health issues. I was intrigued by it because it was so telling, and it didn’t seem real. After digging around on the internet, I found that it’s called reflexology, and it’s a Chinese method of healing. Whatever it is, a foot massage always feels amazing! The Bible mentions the earth being the Lord’s footstool, and in Ezekiel, he mentions the temple as the place of His throne, and the soles of His feet. I feel there is something significant about Him mentioning the soles of His feet, especially in this portion of scripture where He speaks of Israel burying their dead kings next door to His temple. Our world is so defiled right now that the Earth is not worthy of His feet, however, when Jesus sets up His new Kingdom, we will then become a soothing massage for our King.

While the man was standing beside me, I heard one speaking to me out of the temple, and he said to me, “Son of man, this is the place of my throne and the place of the soles of my feet, where I will dwell in the midst of the people of Israel forever. And the house of Israel shall no more defile my holy name, neither they, nor their kings, by their whoring and by the dead bodies of their kings at their high places,"  Eze 43:6-7
Posted by Teresa Gonzalez at 5:37 AM