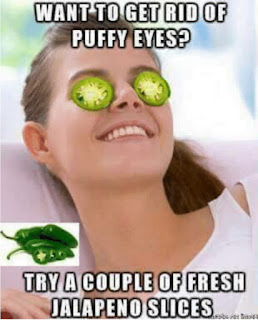 There are a lot of things you have to do to prepare for a party. First of all, I get crazy about cleaning, lets just say, you could lick my baseboards right now! Then, there is the task of preparing the food. This is where things got a little crazy. I found this recipe for jalapeños poppers. It was a seemingly easy recipe with only three ingredients. I’m not sure if God intended for us to eat jalapeños, I think they might be poisonous! I say this because, I was just going about my usual routine like I would when cleaning any pepper, but as I started cleaning out the seeds, I decided that I should breathe as I usually do. That’s when everything changed. You would have thought that someone has just shot me with pepper spray! I started coughing, my nose started running, my eyes began tearing up! I had to move away from the combat zone! Then my daughter Christina decided that she could handle it and took over. So now we are both crying, snotting, coughing, and laughing! The poppers were a hit, and the party was a blast, but next time I make them, I will be sure to dawn the proper attire; mask, eye gear, and maybe a respirator!

"All the days of the afflicted are evil, but the cheerful of heart has a continual feast."  Proverbs 15:15
Posted by Teresa Gonzalez at 5:48 AM