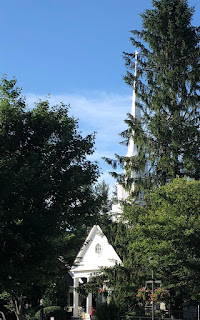 Did we, as a country, make a deal with the devil? The only way I could describe what we are seeing in our country is war. We may not be using physical weapons, but nevertheless, the words are sharp and cutting. A prime example is my church. We are in a city of many churches, more than most towns, yet we have been opposed on every side, not by people, but by spiritual forces. It’s like trying to get through a battle line and the hits keep coming. We are taking ground that hasn’t been touched by other churches, so it’s been like stirring up a hornets nest. I believe the same is true in our country. We are touching on areas that haven’t been touched and the devil is angry. Have we closed our eyes, closed our ears, and shut our mouths to the evil that has abounded from the beginning? We must keep moving forward and keep fighting for truth and justice, and take back ground that was lost to the enemy.

Though Ezekiel is speaking of King Zedekiah, because he broke his covenant with the Lord, the lesson is similar to what we are dealing with today.

"Therefore thus says the Lord GOD: As I live, surely it is my oath that he despised, and my covenant that he broke. I will return it upon his head."  Ezekiel 17:19
Posted by Teresa Gonzalez at 5:25 AM