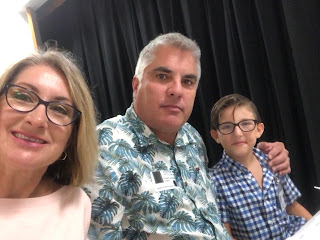 Who ever thought that we would be attending a Grandparents Day lunch with one of our grandsons? It’s not something you think about when you’re younger. We loved every minute of it! Liam was so sweet and loving, he made sure to introduce us to his friends. There was a particular area that we were to eat which had a huge black curtain that divided the children who didn’t have grandparents there and the ones who did. It was a little sad for the children whose grandparents couldn’t make it, however, Liam, being a very social person, kept thinking of friends he wanted us to meet, but the big black curtain kept us separated. You could tell that he wanted to break down the wall of division, and bring us all together. The Bible says that Jesus broke down the dividing wall of hostility between the Jews and the gentiles by abolishing the law of the commandments that kept us separated. By doing this He made us one and brought us peace. Liam was being the example of Jesus trying to bring the two sides together. A better idea may have been to let us sit with all the kids, so there would no longer be a division and we could eat in peace together as one.

For he himself is our peace, who has made us both one and has broken down in his flesh the dividing wall of hostility by abolishing the law of commandments expressed in ordinances, that he might create in himself one new man in place of the two, so making peace, and might reconcile us both to God in one body through the cross, thereby killing the hostility. Ephesians 2:14-16
Posted by Teresa Gonzalez at 4:50 AM