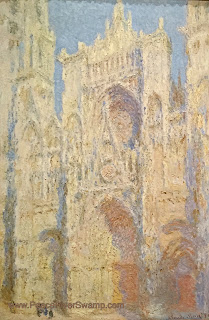 Here it is again! You may think I mention this too often; well, it’s not my fault, talk to God about it! He brings it up all the time! For those of you who do not believe that spiritual beings exist in this world, you might have your head buried in the sand. For most of my life, I’ve belonged to a denomination that never mentioned anything about spiritual beings other than the Holy Spirit, if they did, I completely missed it. It wasn’t until I spent nearly four years learning how to study God’s word that I realized how much I’d been missing. I’m sure it was unintentional being the writer was from the same denomination that I had always belonged to! Like it or not, there are powers and principalities of the air, - you can’t see them. Before you were saved by the grace of God through your faith, you were a part of that world. There are no gray areas when it comes to that; you are either alive in Christ, or you are dead and of the darkness. We’ve all lived in that world at one time or another, but thankfully we heard about Jesus and were brought out of the darkness of sin and wrath, and now live in His light. Take your head out of the sand; you can’t fight against something you don’t believe exists.

And you were dead in the trespasses and sins in which you once walked, following the course of this world, following the prince of the power of the air, the spirit that is now at work in the sons of disobedience— among whom we all once lived in the passions of our flesh, carrying out the desires of the body and the mind, and were by nature children of wrath, like the rest of mankind. Ephesians 2:1-3
Posted by Teresa Gonzalez at 5:23 AM