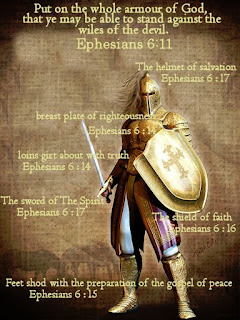 Why do we need to armor-up spiritually? I know you’ve heard this many times, but we are not alone on this earth. Satan and one third of the angels were cast out of heaven and now reside between here and the stars in the form of spirits. We know there are a lot of them because Jesus cast out legions of them from just one man, which is anywhere between 3000 and 6000! In Hebrews it says they are innumerable. They are not here to be our friend, even though they disguise themselves to be. They wreak havoc on us by having weak, and vulnerable people do their bidding. Yet another reason to have compassion on hateful and vicious people, they are being toyed with by the enemy who doesn’t want them to know Jesus because they are a useful tool. This enemy is more dangerous than any other enemy because they are invisible. To combat this spiritual enemy, we need spiritual armor. Paul describes this armor like what he saw on a Roman soldier.

If you are one who goes through the motions of putting on the whole armor of God, you must know what each piece represents. I will cover two of them today. This is found in Ephesians 6:10-20.

The belt of truth: We must know the truth of the gospel! How can you know the truth? Open up the word of God and read it! This is the one piece of weaponry that you can physically see. Without this one piece of armor, you will be completely naked in your fight against the enemy. It is what holds our armor together.

The breastplate of righteousness: This part of the armor, on a Roman soldier, was the shiniest, most visible part, and it covered all of his torso, front and back. It was for the protection of his vital organs, especially the heart! Righteousness is opposite of sinfulness. We are not righteous within ourselves, but are righteous because of Jesus. We put on His righteousness to stop the penetrating darts and lies that the enemy throws at us from soiling our hearts and minds. Ask forgiveness daily.

So far armoring-up means: read your bible, and be free from sin.

Stand therefore, having fastened on the belt of truth, and having put on the breastplate of righteousness, Ephesians 6:14
Posted by Teresa Gonzalez at 6:10 AM