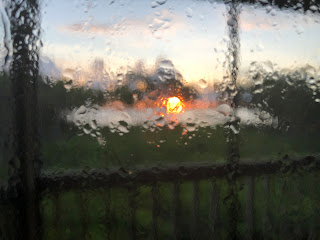 God’s timing is perfect. Early in the morning, while on a quick trip to my favorite little island paradise, I’m awakened by this vibrant light peaking through the blinds. So I get up and look out the window and there it was, the most glorious ball of fire making its appearance on the horizon. I get excited every time I see it! If I had slept just a few minutes more, it’s brilliance would have been diminished because of the flood of light that comes with it. It quickly goes from bright orange to almost white. There is no denying the works of God! As Christians, we are privileged to have been given some understanding of the magnitude of the Almighty God through the Holy Spirit and His written word, but it’s not hidden; even to those who have no understanding of who He is can clearly see the intricate details of His creation, and it testifies to a being that’s more majestic than one can imagine. Aren’t you thankful that you are a part of His kingdom? Give thanks to Him today because it’s an honor to be called a child of God.

For what can be known about God is plain to them, because God has shown it to them. For his invisible attributes, namely, his eternal power and divine nature, have been clearly perceived, ever since the creation of the world, in the things that have been made. So they are without excuse. Romans 1:19-20
Posted by Teresa Gonzalez at 5:47 AM