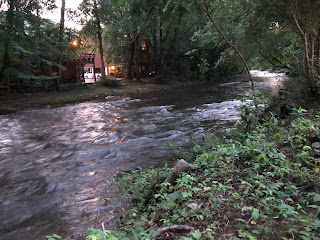 As we were coming back from the mountains, the sun was shining, traffic was clear, and we were beating the GPS in arrival time. You know what it means if you’re beating the original arrival time on the GPS! When we got close to Atlanta, the lanes became confusing and we missed our turn, I think we may have been heading to Alabama! It was a slight detour and we were back on track. We were right on schedule until we reached Gainesville and someone turned on the faucet and the clouds opened up and traffic slowed to a crawl! We got home right on schedule, but not before. You know that God has us on a path that is part of His plan. Sometimes we are sidetracked by getting off at the wrong exit because we fail to listen to His direction. Other times we are delayed, like getting caught in the pouring rain, but we are on schedule and will arrive at our destination right on time! Don’t get frustrated when things don’t go as planned, it’s not your plan!

The heart of man plans his way, but the LORD establishes his steps. Proverbs 16:9
Posted by Teresa Gonzalez at 4:55 AM