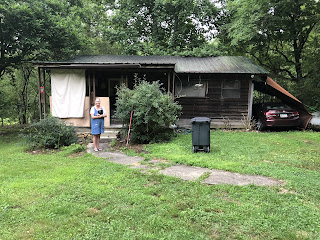 During our trip, one area we explored was where Richard had spent quite a few summers as a kid. He helped his uncle build cabins in the mountains of northern Georgia. One of the cabins he helped build belonged to his grandmother, and he was determined to find it even though he had no idea where it was. He had an old, outdated address that included a rural route, which are no longer used. He did some research online to no avail. He decided to go to the county office and see if they could help, but they were no help and led us on a wild goose chase. After hours of driving through the mountains on some very rough roads, he decided to call a family member who had been there within the last couple of years and she was able to direct us right to it. Many of his memories began flooding back. It’s so funny how things you thought were big when you were a kid, end up being dinky. The best part of all of this was the interaction with the people; the personnel at the county office, the woman who currently owns his grandmother’s home, the tenants and owners of the hotel, his cousin, and more. When you focus on people and not just the destination, you will abound with blessings. Change your outlook to people and your destination will be fantastic no matter where you go.

The second is this: ‘You shall love your neighbor as yourself.’ There is no other commandment greater than these.” Mark 12:31
Posted by Teresa Gonzalez at 6:01 AM