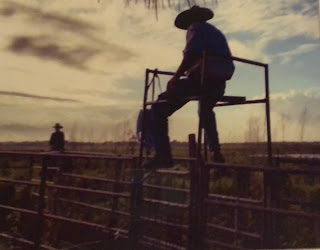 As I sit in my cozy home in the middle of Brandon, my family continues to produce beef that probably ends up on your table at some point. Though I don’t get out and work the cows anymore, I know what it’s like. Now my husband handles that responsibility. After the cattle were rounded up and penned by my brother, the next step was to get them all wormed and to load the calves into the trailer to take them to the market. As they were trying to get them loaded, one of the calves legs began collapsing under it, right in the loading chute. They finally got it in the trailer only to have it trampled by the other cattle.

After getting them to the market and unloaded, it appeared to be dead, so my husband began driving it back to the pasture to leave it there because they had more cattle to haul. My husband has a huge heart and was so upset about what had happened to this calf that he began praying for it. Once he got back to the pasture, my brother and my nephews dragged it off the trailer so they could load the rest of the cattle. My husband poured some more liquid over it just trying to help. When all of the sudden, it got up onto all fours and began to walk away! They were all shocked! This is just an example to prove that there is nothing too small to pray for, and it’s also proof that God cares for all of His creatures. He owns the cattle on a thousand hills, including this one!

And Jesus answered them, “Have faith in God. Truly, I say to you, whoever says to this mountain, ‘Be taken up and thrown into the sea,’ and does not doubt in his heart, but believes that what he says will come to pass, it will be done for him. Therefore I tell you, whatever you ask in prayer, believe that you have received it, and it will be yours. Mark 11:22-24
Posted by Teresa Gonzalez at 5:57 AM