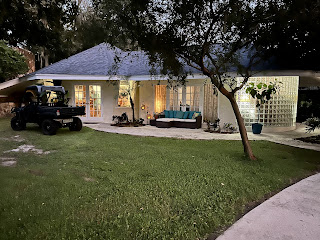 There is much to do as we get ready to undergo the adventure of remodeling. We have an accessory building that our family would gather in during Christmas. It's nearly ready for us to move into, and though it's small, I'm looking forward to living in it because I've decorated it with some of my favorite things. We recently moved a refrigerator and stove into the space; it was more of a party house than a guest house, so it didn't have a kitchen; we had to retrofit one. We had found the appliances in the garage; my father-in-law had planned to remodel the kitchen and had already bought them. We knew of his plans but hadn't realized how long ago it was until I read the label on the refrigerator, and though it was new in the box, it was 12 years old! Yesterday, I decided to peel the labels off the refrigerator and plug it in to ensure it worked. After sitting in the garage, in the heat for so many years, I could barely get them off; they were nearly permanently attached! I still have some goo to remove.

When you became a Christ-follower, you had many labels attached, and some were hard to remove. Even though Jesus thoroughly cleansed you of your past, some sticky residue is still there and has taken a little extra time to clean. Not because he didn't get it all off but because we keep wallowing in self-pity and reminiscing about our past. Stop looking back! Move forward. You don't live in the past anymore. You are a new creation in Christ; it's time to start acting like it. Just like the brand new, old refrigerator in the box, it's time to plug into God's power source and live your life for him.

Therefore, if anyone is in Christ, he is a new creation. The old has passed away; behold, the new has come. 2 Corinthians 5:17

Posted by Teresa Gonzalez at 3:05 AM