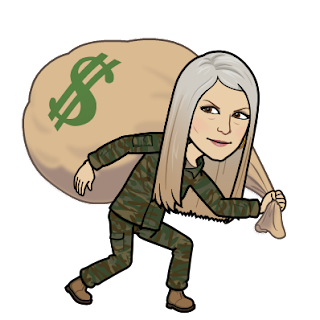 Saturday morning, my husband and I made plans to go to his dad’s house to do some cleaning. He was quite a collector of many things, and we needed to begin sorting them out. I was a minute or so behind him as he went to unlock the gate and the door to the house. When I got there, there was something odd; the garage door was partially opened. Just as I noticed, he called me and told me to meet him on the next road over, and he was out of breath. So, I hurried over there to find out what was going on. He had chased a thief who had tried to steal some coins that were hidden in one of the many barns on the property; the coins were too heavy for the thief to carry, so he dropped them so he could run. However, he also dropped his phone, and it was found!

Many unscrupulous actors are out there trying to steal from the vulnerable, but not in the way you might think. The most precious thing we have is our salvation through Jesus. There are people out there hiding in the shadows with nearly the same message of “salvation,” but only slightly off so the unsuspecting don’t notice their thievery; I’m referring to the false teachers and prophets. We have our salvation, but it’s the people who don’t know Jesus that are subject to their lies. The devil has been around for a long time and has infiltrated some of the most popular church denominations. We must be careful, and we must know the truth for ourselves and chase the bad guys out so they drop everything they’ve stolen so we can recover those he tried to carry away.

But false prophets also arose among the people, just as there will be false teachers among you, who will secretly bring in destructive heresies, even denying the Master who bought them, bringing upon themselves swift destruction. And many will follow their sensuality, and because of them the way of truth will be blasphemed. And in their greed they will exploit you with false words. Their condemnation from long ago is not idle, and their destruction is not asleep. 2 Peter 2:1-3

Posted by Teresa Gonzalez at 4:27 AM