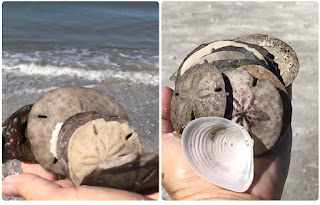 Yesterday was a perfect day for a walk on the beach. Since it’s been a while, I asked God to teach me something, and as usual, he did. I began to notice broken sand dollars strewed along the water’s edge. I thought that since I saw the broken ones, I may find some whole ones. Sure enough, as I began to focus, I started finding them whole.

A man walking on the beach noticed that I had treasures in my hand, so I showed him what I had. He mentioned that he walked the beach often and had never found any sand dollars. Since I have a huge jar of them at home, I gave him what I had in my hand, then I turned around and began walking back. I had already combed that portion of the beach, so I didn’t expect to find anymore. However, by the time I had gotten back, I had replenished what I had given away, plus more! What’s interesting is that I had a feeling God was going to do that for me, and sure enough, he replaced what I had given away. When God has a plan, nothing can stop it, and he planned to bless that man with sand dollars and bless me by replacing what I had given away.

Oh, and I had on a Jesus shirt and a Jesus hat, so I didn’t have to say a word about where my faith lies.

Do not neglect to do good and to share what you have, for such sacrifices are pleasing to God. Hebrews 13:16

Posted by Teresa Gonzalez at 4:26 AM