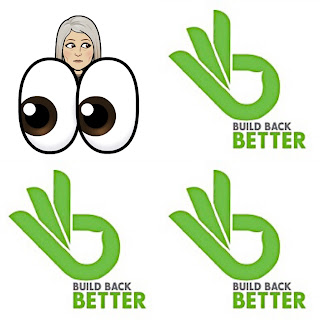 So far, I’ve been very kind in calling out the Hollywood elites, wealthy politicians, the medical industry, tech giants, banks, world governments, and many others, who seem to be of the same mindset and are pushing the New World Order; these people have sold their soul to the devil. They are in control of every aspect of our society, and it is filthy! People grovel at their feet, wanting to be a part of them or aspire to be just like them because of their money and fame. You see many of them involved in Baal worship. Are these people the woman, the harlot, the prostitute of Revelation? Regular people grovel at their feet, but they don’t grovel at the feet of the Catholic Church; they only attend as a ritual. Like the Catholic Church from yesterday's post, with the parishioners unaware, some people belonging to these groups have no sinister plans.

Look at the movement around the world called “Build Back Better.” It seems harmless unless you look closely at the symbolism, which will be their downfall. Build Back Better, bbb, or 666! Do you see it? Remember who is pushing it along with the “medical intervention” we see in every ad on television. The harlot is trying to draw you in and sell you her wares to as a prostitute would! This is a spiritual war, and we need to be in the fight! Also note, they have set themselves to come against Jesus and everything Christian. If you are asleep, you need to wake up and get your head out of the sand; we are in the middle of this right now! If we work together to get these labels affixed to the appropriate characters in Revelation, I think the picture may become more transparent.

THIS VERSE IS FOR US RIGHT NOW!!

Then I heard another voice from heaven saying, “Come out of her, my people, lest you take part in her sins, lest you share in her plagues; Revelation 18:4

Posted by Teresa Gonzalez at 6:10 AM