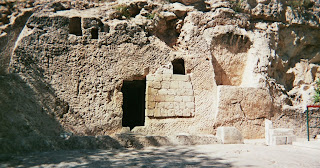 Today is a genuinely solemn day. A day of quiet respect for the LORD, as he was fighting a spiritual battle for our souls while his body lay dead in the tomb. But, not for long, tomorrow is coming.

Jesus is LORD. If you don’t believe he is by now, then your heart is hardened by unbelief. There is enough evidence to prove that he is who he says he is, and if you still don’t believe, then you probably desire to stay in your sin; your heart is like a rock and unmovable. Hell is real; turn away from your unbelief today and ask Jesus to help you if you can muster up the courage to utter the words.

So they took the body of Jesus and bound it in linen cloths with the spices, as is the burial custom of the Jews. Now in the place where he was crucified there was a garden, and in the garden a new tomb in which no one had yet been laid. So because of the Jewish day of Preparation, since the tomb was close at hand, they laid Jesus there. John 19:40-42

Posted by Teresa Gonzalez at 3:59 AM