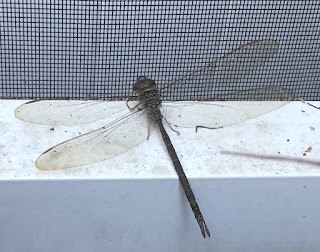 As I was writing and studying this morning, I heard a knocking on the window. It sounded like someone setting off fireworks, so I got up to see what it was. Much to my surprise, it was a dragonfly that got caught in my screened enclosure and couldn’t escape. I caught it and let it out, but it came back in! Unfortunately, when I caught it again, I injured it, because now it’s dead. It makes me sad because I only intended to turn it loose so it could be free.

A dragonfly is harmless to humans, but to other insects, it is a ferocious predator! Ezekiel mentioned a dragon when God told him to raise a lamentation over the Pharaoh king of Egypt. His lament about the dragon was anything but harmless. I know it’s just a bug, but it is predatory, so I assume that’s why it’s called a dragonfly. Here’s the scripture:

“Son of man, raise a lamentation over Pharaoh king of Egypt and say to him: “You consider yourself a lion of the nations, but you are like a dragon in the seas; you burst forth in your rivers, trouble the waters with your feet, and foul their rivers. Thus says the Lord GOD: I will throw my net over you with a host of many peoples, and they will haul you up in my dragnet. Ezekiel 32:2-3

It makes me a little ill, considering how I caught and killed that dragonfly; it was with a net! Is this just a coincidence? I think not! We had each better get things right with God because the issues in the world resemble this lamentation. The wicked are being gathered and put on display, and the carrion birds will feast. Does the fact that I killed this dragonfly say what might happen to the dragon trying to take over our world? I hope so!

Posted by Teresa Gonzalez at 6:14 AM