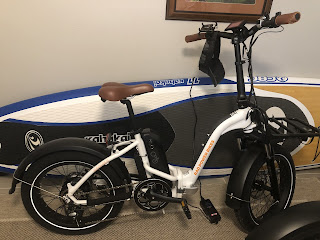 Yesterday, I decided to take my new bicycle out for a ride through Indian Rocks Beach, it’s a little town just a bit down the road from my place. My new bicycle is an e-bike, which means it has motor-assisted power, so it goes a little faster than a regular bike. I had a hat on my head to help shield my face from the sun, but because of the force of the air as I cut through it, my hat flew off, and I had to backtrack to go and get it. I put it back on and secured it with a clip, but it happened again, only this time the clip held it. It caused me to stop anyway because it was hanging off the back of my head and had become a nuisance, so I took it off and attached it to my handlebars.

There is so much to learn from this. The hat represents authority or covering. The air represents the Holy Spirit. The power bike represents a powerful or reactive ministry. So I have to think, am I getting ahead of the LORD? Or is the enemy trying to slow me down? However, if the air represents the Holy Spirit, I have to consider that I may be pushing forward too fast because my hat got knocked off twice, except that moving the cap to the handlebars put the authority back where it belongs, in the hands of God because he’s the one steering. If the enemy intended to throw me off my game or discourage me from moving forward with a new ministry, he lost.

Remember that the enemy hates it when you work for the LORD and will try his best to discourage you. You must push through your disappointments or distractions; never quit.

For no one can lay a foundation other than that which is laid, which is Jesus Christ. Now if anyone builds on the foundation with gold, silver, precious stones, wood, hay, straw—each one's work will become manifest, for the Day will disclose it, because it will be revealed by fire, and the fire will test what sort of work each one has done. 1 Corinthians 3:11-13

Posted by Teresa Gonzalez at 5:07 AM