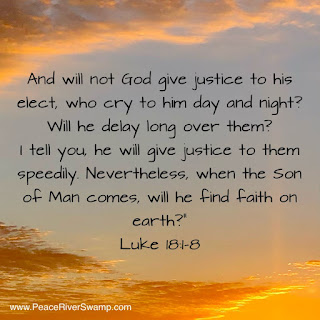 I’ve gone before judges more than I’ve ever wanted, but in most cases, I’ve been vindicated, but not every judge is good. I have friends whose son was given a raw deal and ended up in prison; the judge was unrighteous and thought he was ruining this young man's life, but he didn’t; he grew closer to God while there. God always wins. Because our judicial system seems to be failing, I make it a point to investigate every judge that asks for my vote; it’s a lot of work because they don’t want you to know where they stand on critical issues, so they hide their bias. Never skip that part of your ballot so that we don’t end up standing before unfair judges.

The one thing we can count on is that God is a righteous judge, and he sees what’s going on. I know everyone is crying foul right now, but know this, we WILL be vindicated! We are the elect, and Jesus promises justice for us.

And will not God give justice to his elect, who cry to him day and night? Will he delay long over them? I tell you, he will give justice to them speedily. Nevertheless, when the Son of Man comes, will he find faith on earth?” Luke 18:7-8

Posted by Teresa Gonzalez at 4:43 AM