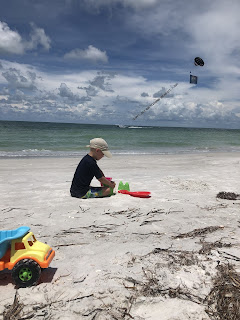 A while back, my grandson and I were swimming at the beach, while Richard watched from the shore. We had gone out to a sand bar that was a little ways out. Richard began motioning that there was something big coming our way, but he couldn’t tell what it was. I love the beach, but the creatures that reside in the water freak me out! I tried not to overreact because I didn’t want to scare my grandson, so I remained calm and looked to see what it was; thankfully, it was just a manatee because it came within five feet of us!

Just yesterday, I was wading out to cool off from the heat of the sun; I was in water up to my neck; the further I went out, the colder the water became. Suddenly I was surrounded by tiny fish, which always causes me concern because I’m sure something big is chasing them. I stopped worrying about it and moved toward the shore. As I was enjoying the coolness, without noticing my surroundings, a fish ran into me! What the heck! I’ve never had that happen, but before I got out of the water, it had happened to me two more times! Not only was that a surprise, but I saw a fish that was about 5 feet long jump out of the water, and it wasn’t a dolphin! I think it was a tarpon.

Just like there are great wonders in the ocean that we cannot see, there are wonders within our atmosphere that are hidden. We are surrounded by heavenly beings that are our allies. Though the enemy is among us, there are more that are on our side. Only one-third of them are against us, which means two-thirds are for us. Rest easy, though the scary ones make a lot of noise, the heavenly hosts are watching and protecting.

His tail swept down a third of the stars of heaven and cast them to the earth. And the dragon stood before the woman who was about to give birth, so that when she bore her child he might devour it. Revelation 12:4

Posted by Teresa Gonzalez at 6:06 AM