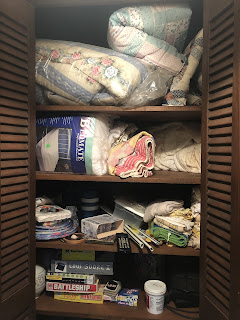 When my father-in-law purchased the mountain cabin, it came with all the furnishings. He’s probably owned it for ten years and hasn’t changed a thing. Each time we come, he comes with us, and he likes to keep everything! The last couple of times, we traveled without him, and it has allowed me to sort through some of the old stuff. The last time we came, I sorted through the kitchen, and there were four or five pitchers for beverages, an assortment of ancient small appliances that had seen better days, and an abundance of other things that we didn’t need. This time I’m going through the closets; I’ve only seen more blankets than what we have here in stores! The woman who lived here before us was a packrat! Up until yesterday, it had curtains that were lace ruffled with fabric from that 80’s style country decor; they were so old that the material stuck to the curtain rods! I hope he doesn’t get mad when he notices that they are gone! It’s amazing how refreshing it is to get rid of the things of the past.

When Jesus comes to rule in his kingdom, he will send angels to sort the people and remove the evil ones who’ve been allowed to grow with the good; much like I’m sorting out the good stuff from the bad stuff. The old stuff, much like the evil of the world, will be gathered and eventually be burned. Then the righteous will shine like the sun.

The Son of Man will send his angels, and they will gather out of his kingdom all causes of sin and all law-breakers, and throw them into the fiery furnace. In that place there will be weeping and gnashing of teeth. Then the righteous will shine like th

Posted by Teresa Gonzalez at 5:44 AM