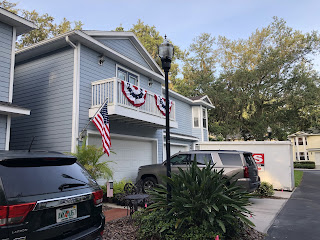 I had such high hopes to show you how patriotic my neighborhood is, however the neighbor beside me decided that she should bring in a Pod on our weekend of celebrating Independence Day, and that messed up my perfect picture. Isn’t that the way it always is? For the first time, I’ve been able to use bunting to decorate, something I’ve wanted to do, but didn’t have a place to display them. Even though my perfect picture is a little skewed, I’m still very happy about my decorations. Not only that, but I started a trend, and many of my neighbors purchased bunting and are displaying their patriotism along with me. It looks like a Norman Rockwell poster, except for the Pod!

We should never forget what our forefathers did to bring us freedom, they had to fight for it, and now we are living in relative peace. In those days, though they were not perfect men, they sought the Lord, and he allowed our country to prosper, and become the mighty force that it is today. Should we give that up because the enemy has overtaken a good portion of our country? I think not! We must rise up and seek the Lord with all our hearts, and pray once again for independence from those who intend to destroy us. We must not let the evil one receive more power. Pray that men and women of God are elected, and do what is right in his eyes.

The Spirit of God came upon Azariah the son of Oded, and he went out to meet Asa and said to him, “Hear me, Asa, and all Judah and Benjamin: The LORD is with you while you are with him. If you seek him, he will be found by you, but if you forsake him, he will forsake you. 2 Chronicles 15:1-2

Posted by Teresa Gonzalez at 5:17 AM