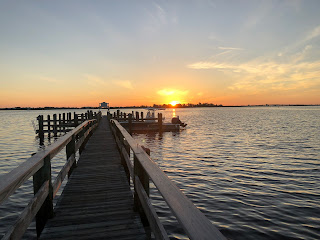 Richard and I spent all day New Year’s Eve in the Apple Store. An incident requiring immediate reconciliation had occurred rendering his handheld computer useless. We had been out fishing, but hadn’t used all the bait because the fish weren’t biting. When we returned, Richard and Doug, my son-in-law, decided that they would try their luck at fishing off the dock. The tide was low and the dock was quite high out of the water. Richard decided to get comfortable by sitting on the railing, when suddenly the railing gave way, plummeting him into the cold water. Luckily the railing didn’t follow him into the water. He wasn’t hurt, but his phone was ruined. The point of this story is that unexpected things happen that nothing can prepare you for. One second you are dry and cheerful and the next you are sinking into the unknown. Are you prepared if the unthinkable happens to you today? With Jesus you are always ready! Ask Him to be the King of your life today.

“For God so loved the world, that he gave his only Son, that whoever believes in him should not perish but have eternal life. For God did not send his Son into the world to condemn the world, but in order that the world might be saved through him. Whoever believes in him is not condemned, but whoever does not believe is condemned already, because he has not believed in the name of the only Son of God. John 3:16-18
Posted by Teresa Gonzalez at 5:07 AM