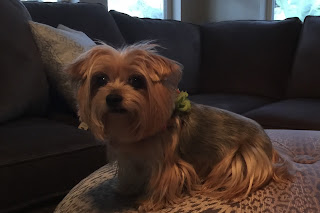 My dog Coco is a seven pound Yorkshire Terrier with an attitude toward other dogs. The trouble with that is, she doesn’t know she’s small, and will go after a dog four times her size! It makes perfect sense, her humans are exceedingly larger than the dogs she’s going after. It’s a great attitude to have, except most dogs are friendly and just want to play with her. We could learn a lesson for her. Our God is much larger than the enemy that threatens us, and the battles we fight, we don’t fight alone. However, the human that is a pawn in the game, is not the enemy. The enemy is the powers and principalities of this dark world. We should all go into battle and fight with an attitude like Coco, if only our eyes were open and we could see them. Let me assure you, the forces with you are greater than the forces against you.