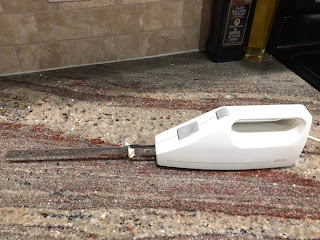 It had been a while since we use the electric knife, so when I got it out of the cabinet and it was dirty, I was surprised, because I know I wiped it down before I put it away. I either hadn’t cleaned it very well, or grime just grows! I cleaned it up and we used it. Before putting it away again, I decided to give it a really good cleaning, getting down in the cracks where it comes together. I got a wild hair and decided to take it apart, and much to my surprise, the inside was filthy! I was disgusted! It’s an electric device, I don’t think opening it up should be part of the routine! If that knife was human, I would say it was like a Pharisee, what Jesus would call a whitewashed tomb! If you were to look inside some “Christians,” the filth inside would disgust you.

The name “Christian” invokes the same connotation in the secular world as Pharisee does in the Christian world. Stop using Jesus’s name if you’ve not turned away from your sin. We are the reason our world is turning up-side-down. The enemy uses our behavior to trap us. We can’t turn anyone to Jesus until we turn ourselves around.