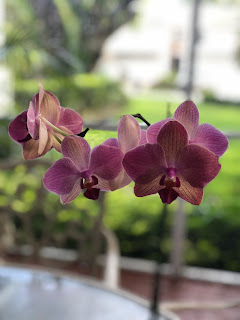 Earlier this year, I bought a few orchids that were in full bloom. After all the rain, I decided I needed to check on them. It turned out the pots they were in were full of water and the material they were potted in had begun to rot. I poured all the water out and decided to repot them in new material. After getting well into it, I decided that I should probably check the internet to see if it was safe to repot the ones still in bloom. It turned out that I shouldn’t because it might kill the plant. It was too late for one plant! How often do we set out to do well with little knowledge and end up causing more harm than good? My orchid is an example, but it’s just a plant. One little deviation from the word of God could cause death or destruction to the hearer. Pray for knowledge and wisdom, then seek to gain it by studying the Word. You never want to be responsible for someone heading in the wrong direction, it would be better for you and for them if you hadn’t said a word.

O Timothy, guard the deposit entrusted to you. Avoid the irreverent babble and contradictions of what is falsely called “knowledge,” for by professing it some have swerved from the faith. Grace be with you. 1 Timothy 6:20-21
Posted by Teresa Gonzalez at 5:15 AM