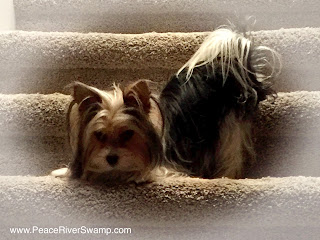 This might sound silly, but I’m going to tell you anyway. Some days I have a hard time concentrating; me being sleepy, the dog, or some other distraction. Rudy, my dog, likes to throw his bone in the air and then tackle it, but this day, for some reason, every time he threw it, it would go under the furniture. After doing that about three times, I had had enough! Then he tossed it again and it went under my chair. That was it! I wasn’t going to get it for him again! Let me preface this by saying that if I don’t get it for him, he will whine and carry on like a crybaby, so there is no ignoring him if I want any peace. So, I prayed and said “Lord, he won’t listen to me, but he will listen to you, could you please make him lay down and go to sleep?” I was floored when he immediately jumped up on the couch beside me, curled up and went to sleep! Why would I doubt? All things are possible to those who believe!

And Jesus said to him, "'If you can'! All things are possible for one who believes." Mark 9:23
Posted by Teresa Gonzalez at 5:18 AM