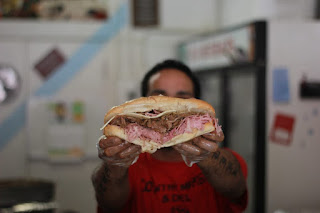 My daughter had an appointment in St. Petersburg and my son in law and I went with her. While she was seeing the doctor, we decided to get a bite to eat. We asked the receptionist for some recommendations and she suggested a little place near the office. We were a little shocked when we saw it and were very leery about going in because the building was quite deteriorated, it gave new meaning to the expression “hole in the wall!” The people that were waiting for their food weren’t much to look at, but after placing our order, they began a conversation. We had just stepped into a culture unlike the city of its location, possibly like a place in Cuba or other Spanish city. We had left the U.S. for an hour and it was well worth it! The food was amazing, but the experience even better! Don’t be so quick to judge a situation, you never know what God has in store for you!

Let no one seek his own good, but the good of his neighbor. Eat whatever is sold in the meat market without raising any question on the ground of conscience. For "the earth is the Lord's, and the fullness thereof." 1 Corinthians 10:24-26
Posted by Teresa Gonzalez at 5:01 AM