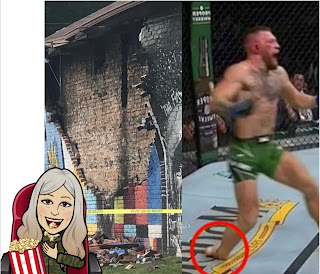 I’m sure you’ve seen the pictures and videos of two random acts of God this week. One being the lightning strike that demolished the image of the idol of the woke cult, George Floyd. It struck precisely on his face crumbling the brick facade to the ground. There were no thunderstorms in the area and no record of the strike at the local weather station. Hmm, I wonder how that happened?

To set the scene for the second one, a reporter asked Conor McGregor, an MMA fighter, if he could beat Jesus in a fight, and he said, “even Jesus couldn’t beat me!” He arrogantly said something along the same line the day of the fight. In a cringe-worthy fashion, McGregor’s leg broke and bent like a rubber toy in the first round of his most recent fight. His opponent wasn’t even near that leg! God doesn’t play! When he decides to display his power for the masses, he does it in a way that grabs attention. In those two instances, it is evident that God had a hand in it.

When are people going to realize that our existence is not a game and we are meant for a higher purpose? The funny thing is, I’ll bet no one will wake up because of these two things being their minds are too overtaken by selfishness. In the light of these acts, you’ve got to wonder what kind of miraculous displays we will see as we near the end of Satan’s reign. Get out the popcorn and watch as it all unfolds before our very eyes.

Do not be deceived: God is not mocked, for whatever one sows, that will he also reap. Galatians 6:7

Posted by Teresa Gonzalez at 4:32 AM