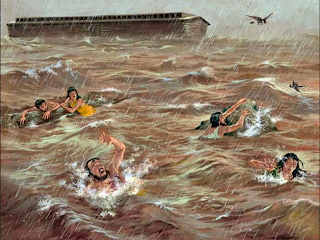 Making my way through traffic early in the morning can be quite nerve wracking. Trying to figure out which roads to take, that yields the least amount of traffic, is my goal. There are red lights, cars trying to merge, and near accidents everywhere. It’s all part of the rat race! I’m a person who believes that if you’re on time, you’re late, and all these people who are rushing around, are probably late. My point today is that everything seems normal. People are going about their business, as if the world hasn’t taken a turn for the worst. The days of Noah were the same. People were engaging in their normal activity, when suddenly the heavens opened up and a flooding rain came and took the breath of every human and animal who had received the breath of life from the almighty God. Today is no different. There will be a shock wave that runs through this world when Jesus brings His beloveds home. Watch out world, He’s coming soon and those of us who have held on to what we have, will be brought into His glory.

Just as it was in the days of Noah, so will it be in the days of the Son of Man. They were eating and drinking and marrying and being given in marriage, until the day when Noah entered the ark, and the flood came and destroyed them all. Luke 17:26-27
Posted by Teresa Gonzalez at 6:15 AM