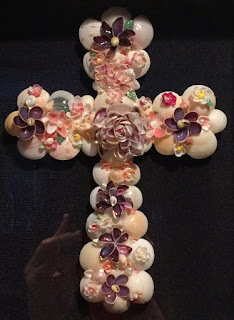 One of the tools I use for writing is an iPad connected to a keyboard. Last year I decided to replace my trusty old keyboard with a newfangled one that had a hard cover, making it resemble a tiny laptop. It’s so cool that it has backlit keys that can change color. Well, last night those beautifully lit keys quit working, so here I am this morning back on the old one. How many times have you gone after something shiny and new, only to find out that it was just a facade and does not represent the truth in any way? Our God is from the days of old and has always been here, and always will be. Chasing after a new way can lead to destruction. No religious leader has come back from death after every ounce of his blood poured out and puddled at the foot of a cross! Be discerning, listen to the Holy Spirit when He gives you warnings, because the devil prowls around disguised as something good.

he has now reconciled in his body of flesh by his death, in order to present you holy and blameless and above reproach before him, if indeed you continue in the faith, stable and steadfast, not shifting from the hope of the gospel that you heard, which has been proclaimed in all creation under heaven, and of which I, Paul, became a minister. Colossians 1:22-23
Posted by Teresa Gonzalez at 5:49 AM