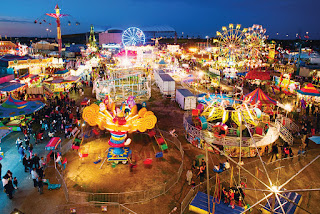 My husband and I went to the Florida State Fair. I realized that I’m no longer amused by the chaos and crowds that surround such an adventure. There were people from every walk of life and of every age, all there to fill up on fair food and possibly catch a glimpse of something unusual, both of which are easily achieved. We spent the money to get in, walked around until we found the delicacies we were seeking, sat, ate, and then found our way through the peddlers and bought a new American flag for our house, then we left! We didn’t even look at the farm animals as we usually do. The things that were once a thrill as a kid, no longer excites. Can you imagine what it will be like when we know fully what we do not know now of the truth about the Kingdom of God? The things we thought were so wise will become rubbish. So for your short time here on earth, love well - it’s the best we can do!