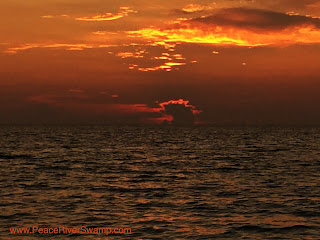 My dad is a big man and has a voice that is as big as he is. I was very careful to follow the rules because I never wanted him to use that big voice to chastise me. He was very loving towards me even though his voice was quite powerful and frightening at times. He's just a human, imagine being able to see and hear God! We would fall on our face in fear! We live in such close proximity to God, but we never see Him or hear Him. Maybe He's protecting us from certain death. He's such a powerful being that we would surely die if we saw His face and our ear drums would certainly be blown if He spoke. Have you ever stood next to a high rise building? You're so close to it that you can't see the whole thing! That's how I think of God, He's so enormous that we can't see Him even though we're standing next to Him. The voice of a being that large would be deafening. Knowing His size, why would anyone want to disappoint Him by disobeying Him?

If you had known me, you would have known my Father also. From now on you do know him and have seen him." Philip said to him, "Lord, show us the Father, and it is enough for us." Jesus said to him, "Have I been with you so long, and you still do not know me, Philip? Whoever has seen me has seen the Father. How can you say, 'Show us the Father'? John 14:7-9
Posted by Teresa Gonzalez at 6:13 AM