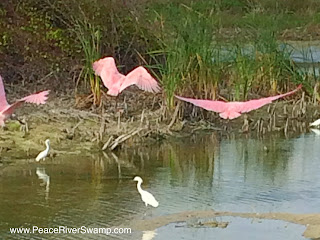 The beautiful Roseate Spoonbills nearly became extinct when Florida was settled because of their beautiful plumage. I can't blame the tourist for wanting their share of those pink feathers, I long to find one that has been shed. The spoonbill population has since become reestablished and are seen quite often feeding in the shallows. It's now illegal to kill them. Isn't that just like humans? We tend to want to kill the most beautiful things so we can hold them close to us. Jesus is the greatest example of this. He was so amazing that the Pharisees and Sadducees were very jealous. They couldn't wait to find a reason to kill Him, but He was perfect and He never did anything that would give them a lawful reason. Nevertheless, they trumped up charges to make themselves feel better about what they were doing. It was all part of God's plan, and now we have our salvation because of it. How scary do you think it was for them when they found out He came back to life?

Indeed, under the law almost everything is purified with blood, and without the shedding of blood there is no forgiveness of sins. Hebrews 9:22
Posted by Teresa Gonzalez at 4:57 AM